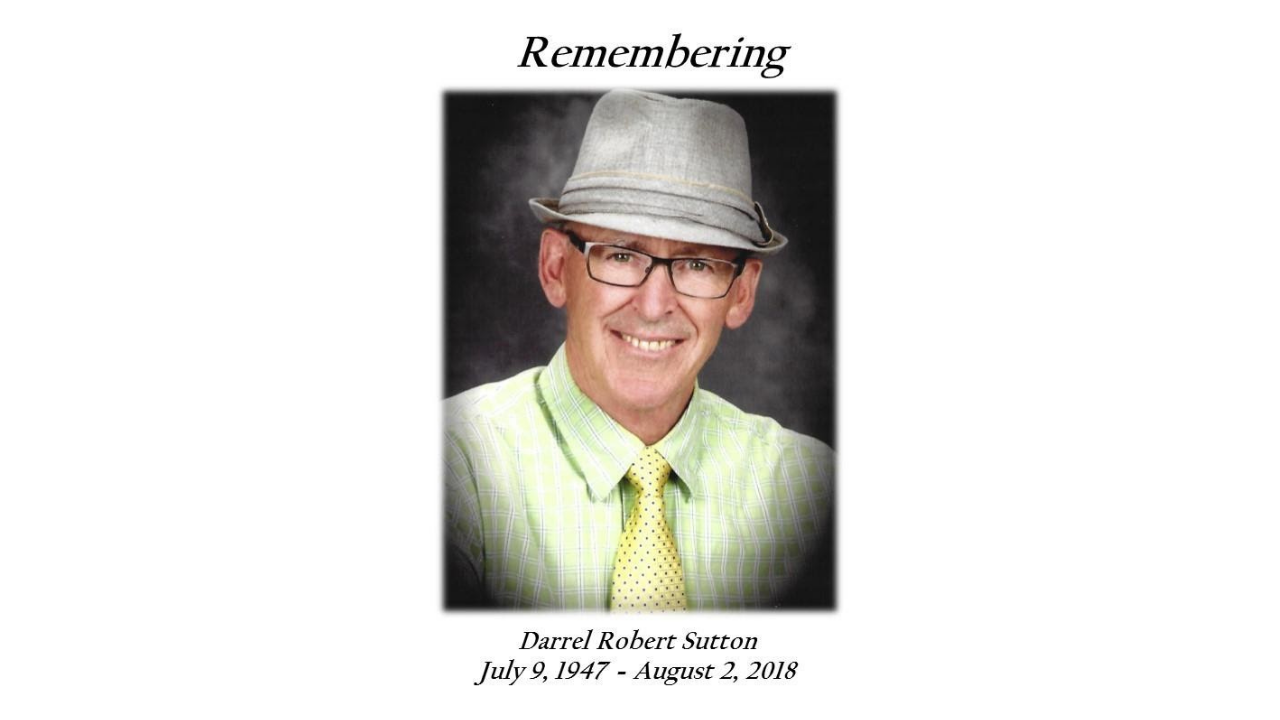 GRATITUDE GOES OUT TO BRENDON BURCHARD WHO INSPIRED ME TO INTERVIEW THE FIRST MAN I EVER LOVED, MY FATHER. BRENDON’S TEMPLATE IS CALLED INTERVIEW SOMEONE YOU LOVE ABOUT LIFE. I HIGHLY RECOMMEND DOING THIS; IT TRULY IS A GIFT.

My father Darrel Robert Sutton believed in the oratory and he believed in the long goodbye. I feel that his goodbye to us started in the Spring of 2007 when he experienced his first of 10 major brain bleeds. Each bleed would create a new baseline and he would learn how to make the best of it. That was Darrel. He chose to make the best of life. He was more optimistic and had more faith than fear everyday. He chose to wake up happy and to go to bed happy. He treated everything as a great and exciting adventure, especially the unexpected like running out of gas or searching for his keys or his wallet.

Just over a year ago, in February 2017, I came across Brendon Burchard’s template for Interviewing Your Loved Ones. I asked Dad if he would humour me and allow me to interview him. After he inquired to how long it would take and who might see it, he said: “if it is important to you sure”. He always made time for what was important to those he loved. So, this is an unusual eulogy, as he has pretty much written it himself. I think he would be okay with this as I have not met anyone better at writing and delivering a eulogy than Darrel Sutton.

Darrel said that when he was growing up in Irricana he truly thought farming would be where he would end up. Someday he would farm; he would take some of his Grandfather’s advice and some of his own. That is truly how Dad went through life, being informed and then following his own intuition.

As a child he enjoyed playing baseball, playing games with siblings, singing with his sister Diane and other family members, hanging out, and socializing. He enjoyed trips to the Okanagan, time spent with all his cousins, aunties, and uncles, and summers with his Grandfather. He loved animals. His brother Don stated that at various times at their home you could find the following pets: cats, dogs, squirrels, snakes, rabbits, a horse, pigeons and unsuccessful attempts at taming a porcupine, seagulls, mice, a weasel and even a skunk.

He went to St. Mary’s High School in Edmonton. His favourite subject was social studies: studying wars, economy, and elections. He was a member of the debating team. He bought his suit second hand for $20.00 and wore it at the Edmonton Debating Championship which was covered on CFRN; his team came runner-up. Darrel really fell in love with the game of curling at this time in his life. He also started his first business. He would shovel people’s walks for $1.25; all except one house would pay him more.

His memory of his Mother was that she always made him feel special. He always felt that he was treated fairly by his Mother. His Mother’s faith, praying, curling, singing, music, family, and her 8 ender were always very important to her. She was very dynamic and loving.

His memory of his Dad was that his Mom was always excited when his Dad was coming home from working the pipelines. Darrel respected his Father and most of the time he earned his Father’s respect. Darrel enjoyed watching his Dad pitch at baseball. He remembers his Dad taking him to church when Mom couldn’t because it was so important to her. It was his actions that showed love. His Dad valued safety, the value of people’s belongings and properties and education; if my Dad greatly disrespected any of these that would be when he would be punished. He said that his Dad was happiest when he was hanging out with the Ouellettes; they were like family to him. He was always very grateful to his Dad for lending him money to buy the business and he was proud that he started paying him back with interest within a year.

When Darrel was asked about meeting his wife Dorothy or as Darrel would jokingly say “my first wife, Dorothy”, he said the following: “I was lucky to be practicing curling at the Balmoral in high school. George, Dorothy’s Dad, was an organizer for the schoolboys. George asked if we knew each other and introduced us. We were both dating other people when we were introduced and eventually we both were no longer dating those people. It was lucky timing. I started thinking of her often; she would come to mind. She loved the Balmoral curling club. We had a lot of interests in common. We got to know each other quickly and learned who each other was. We dated and then went on a ski trip. Before I kissed her good-night I asked her to be my wife. She said yes.”

Darrel said the best thing about being hired at B. Guthrie Engineering was the $1,985.00 car allowance which he used to purchase his Maverick. He liked interesting vehicles. He liked travelling all over the prairie provinces and the trips to Montreal. His boss and the people there really challenged him to look after customers. He was gifted at earning trust quickly and with that came success.

When asked about what made him successful at work he answered: “I was trustworthy. I made a lot of friends. The Royal Bank trusted me. I earned trust on the street and in the office. I believed that I was well-liked and fear drove me to do some things that created more success. Relationships with people helped me to overcome the fear. I became an expert through books and customers and relationships.”

His most challenging time was when he trusted someone who he shouldn’t have and was betrayed by him. It was difficult for him to learn how to let someone go from his life.

When Darrel was asked what 3 events most shaped his life he answered: “Finding Dorothy is number 1, winning the ‘74 Brier and the success of playing my sport, and finding my family in Kelly and Roberta. It was truly how I looked after God’s gifts that shaped my life.”

He said that he could not imagine what life would be like without Kelly and Roberta. He was surprised by how much hair Kelly had when she was born. He remembers it being a difficult journey for Dorothy with both pregnancies and he felt truly helpless. He said he never felt scared to be a parent. He was excited. He saw his role as cheerleader to Dorothy. He described his approach to parenting as “nourishing, loving, and learning together.”

Darrel had loving messages for his siblings: “Thank you for helping me grow up Diane and getting my journey started. You had a voice and I loved hearing you and Mom singing together. Debbie, please always keep in touch. Donald, please remember the journey from growing up to saying good-bye. Devon, please stay in touch with your siblings. Denis, please remember your family from today and yesterday. Dean, thank you for helping your family on this journey. Derrick, I am so sorry that it has been a long and hard journey for you. I love you all.”

Darrel described Dorothy as being patient and understanding with him. He said, “thank you Dorothy for sharing our journey especially this leg of our journey.”

Darrel continued “In this life, I tried to be and want to be remembered for being loving, trustworthy, and blessed.”

Here are some more messages that he had for us all:

When asked what the 3 best decisions Darrel ever made were he said “I already answered this: Finding Dorothy, winning the Brier, and finding my family. Among my proudest moments were graduating from high school, raising a family, bringing Clean Air to the West, and my 1974 Brier Championship.”

About retirement, he said “The word retirement does not look at me as a solution. I am just getting more prepared. Let’s continue and enjoy the gifts we have received.”

He listed his 5 most positive moments of his life as:

Dad almost made his 50th anniversary at The Filter Shop. Please think of him on October 8, 2018.

The message that he most wanted to share with his family is: “I’ve had some hiccups in the last 9 or 10 years that have gotten in the way of driving my business and my family but I am still wanting to learn and help and invest in my family. I will thank the Big Guy one day when I have the opportunity. I am most thankful for the love that has been shared with me by my family.”

On July 25, 2018 Dad had his 10th brain bleed and due to all the scar tissue from the previous bleeds his brain was no longer able to heal or sustain life. His body was maintaining its energy and he had a terrible headache at the time. This man of many words said very few words the 8 days before he took his last breath. At 1:00 AM in the morning on July 26th, he said “Darrel says good-bye. Darrel says farewell. Adieu. Darrel says good-night and good-night” to Roberta and I. On the morning of Tuesday, July 31st through laboured breath he said to his bride “I love you. I love you.” A little later that day, in response to the question “how are you doing?” he answered, “so far, so good”. I might be adopting that as my answer when people ask how I am: “so far, so good”.

On behalf of our family, we thank every person who was part of Dad’s journey. Please continue to keep his memory alive through the stories. He loved a good story. On that note, I will end with one that Frank Omoe shared with us this last week. One evening, long, long ago Dad and Frank’s curling team had the 10th end stolen on them and lost their game. They went upstairs and had a few drinks. Darrel decided that he was not going to have another 10th end stolen against him at this rink again so on their way out, Darrel went on the ice and stole all the 10th end markers used to score the 10th end. He took them home with him and placed them on his trophy shelf. Mom dusted those for years without knowing, the rest of the story.

Please know for Darrel to know you was really to be loved by Darrel. Thank you Dad for an example of a life well-lived. You are still teaching us!

In accordance with federal regulations (CASL), please only provide your e-mail address if you are consenting to receive future emails from Kelly Ann Vass regarding Kelly Ann Vass Akashic Coaching Inc. news, coachings, workshops, trainings, and events. You will have the opportunity to unsubscribe at any time and your email address will not be shared or sold.

Take control of your finances with this free 4-step guide.